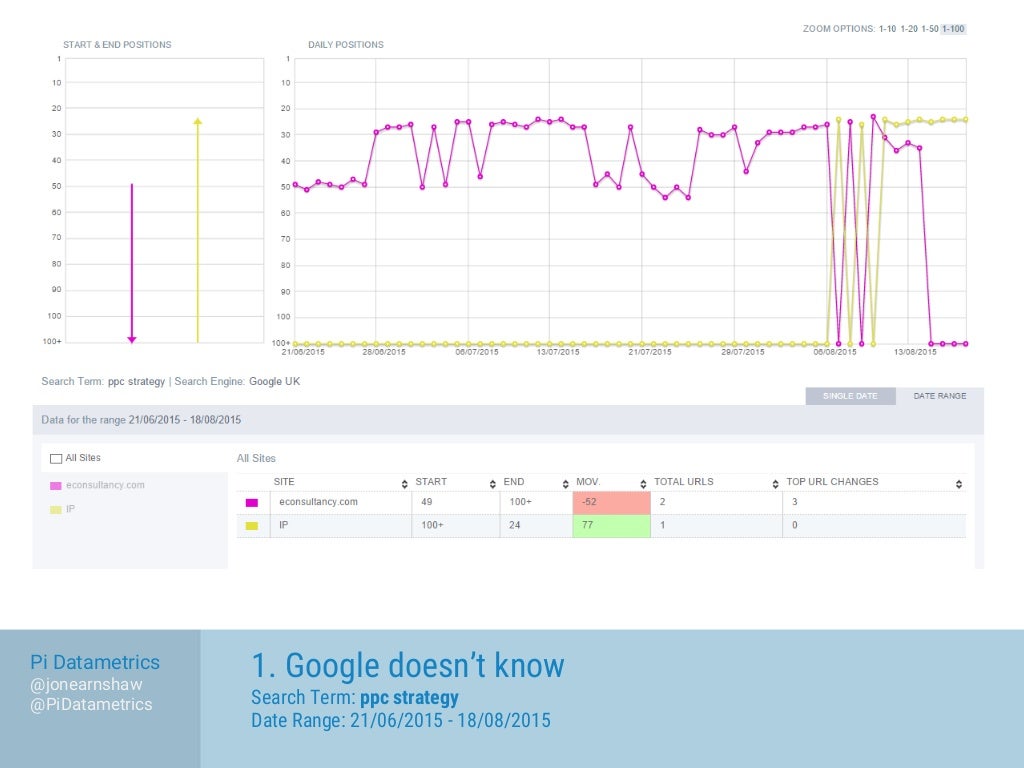 He discovered that one of his clients' sites had lost traffic and ranking positions due to its content being replicated word-for-word on a competitor site, which had then outranked them in the search results. From this, he devised a series of tests to try and discover how Google deals with content cannibalisation and then explained how to fix the problem if you find your content being illicitly used on another site.

For the first test, Jon stole content from Econsultancy’s site and replicated it on his own. Almost straight away Google become confused and Jon’s site replaced Econsultancy in the SERPs, taking a good portion of their traffic.

Neither page had any backlinks, but the Econsultancy version did have a large amount of social shares. It appears, though, that Google doesn’t really take these into account, since the new, stolen content instantly replaced the older, more established content in the search results.

In the second test, Jon stole are article from ClickZ . The original content was ranking well in 3rd position, and it first appeared that Jon’s version had not affected it as their ranking remained static over the course of the test. However, Jon’s content was bouncing in and out of the SERPs, moving up to position 1 for a few days at a time before dropping back out again.

After a further check, Jon realised that there was a third version of the article on the author’s own blog, and that this was the page that Jon’s stolen content was competing with. 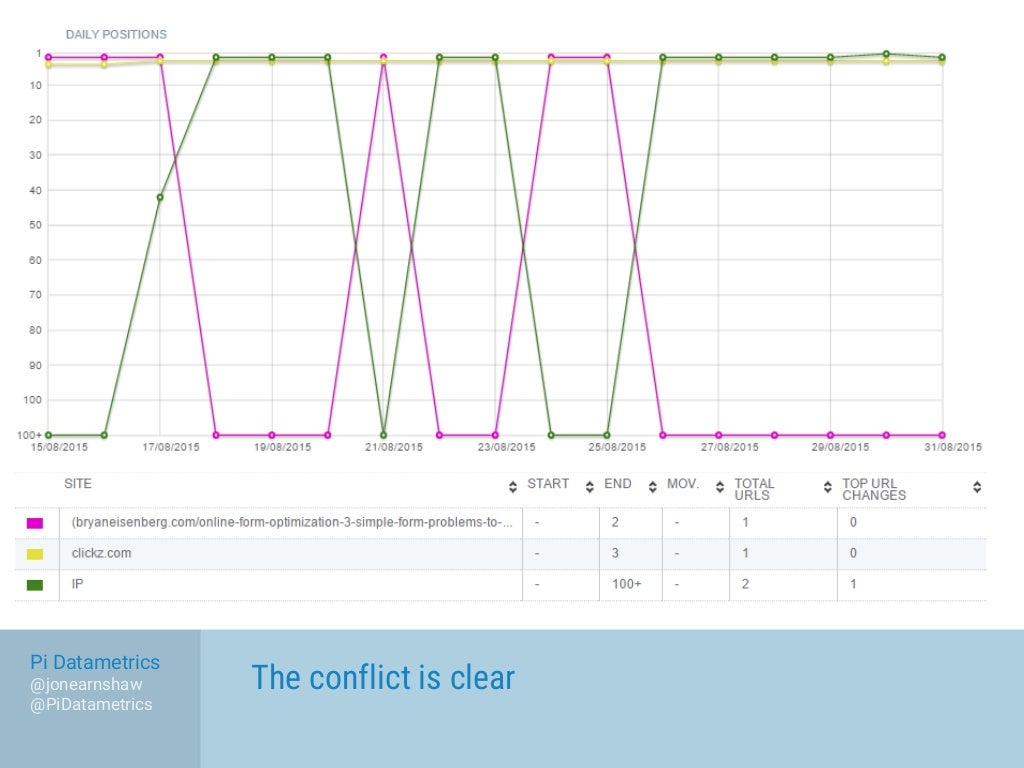 As before, the links and authority of the original articles doesn’t seem to matter and Google’s way of dealing with duplicate content is clearly inconsistent.

Jon looked at 3 different ecommerce sites which re-sell Ralph Lauren products, which all use the same product descriptions on their product pages. Unsurprisingly, he found that they were all competing with each other. 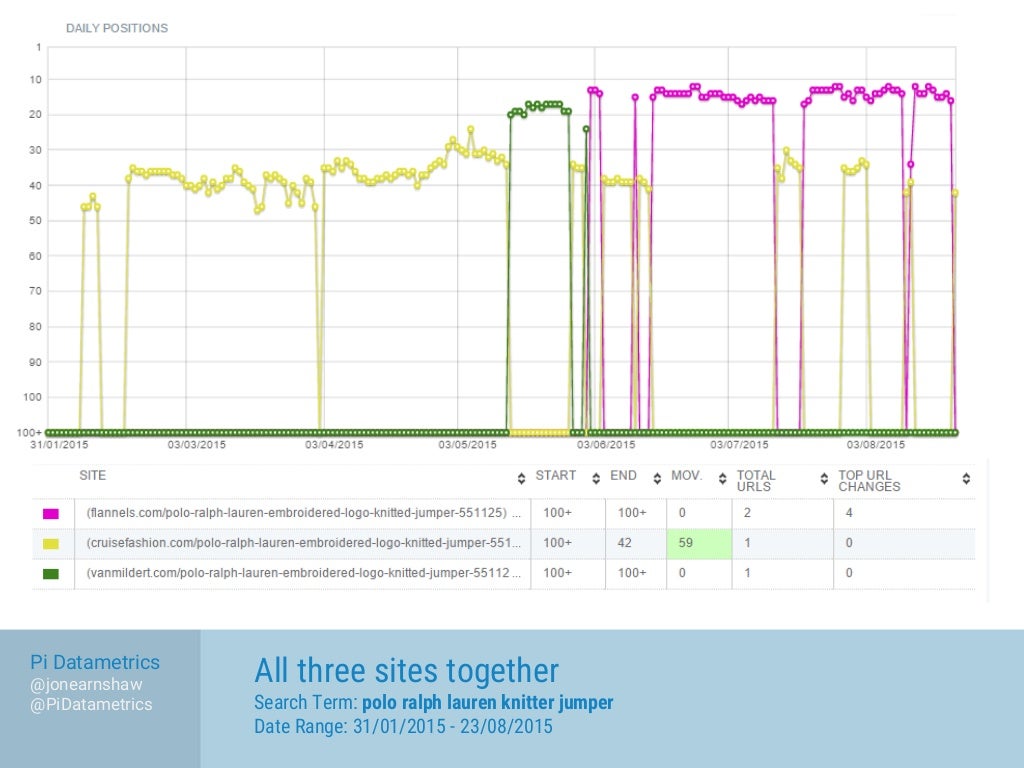 These three tests show that there is no definitive rules to how Google ranks duplicated content across different sites, and that authority metrics do not appear to contribute in determining who ranks where.

But it’s not all bad news…

What Can You Do?

Chris Green of StrategiQ Marketing also gave a presentation about content cannibalisation and explained how to identify and fix these issues.

First you need to figure out what is happening. Hopefully you are already tracking your rankings or traffic – preferably both – so regularly checking your analytics package and Google Search Console for drops in traffic is an easy way to spot any potential ranking drops.

Also, for the above tests, Jon Earnshaw used Pi Datametrics to track the rankings of his own content against competitors.

What is Causing the Problem?

Once you know you have a ranking problem, you need to identify the root cause of it.

Using your favourite auditing tool, such as Screaming Frog or Deep Crawl, you can crawl your site and quickly find any pages that look like they might be causing problems. Things like duplicate URLs, duplicate titles and – of course – duplicate text content, will all be red flags. If these pages match up with the ones which have lost rankings or traffic, then you’ve found the pages you need to focus on.

If you can’t spot anything obvious, then another website may be cannibalising yours. Performing some manual searches for the keywords which have seen decreases should help you identify the offenders, but there are tools out there that can do this for you too. 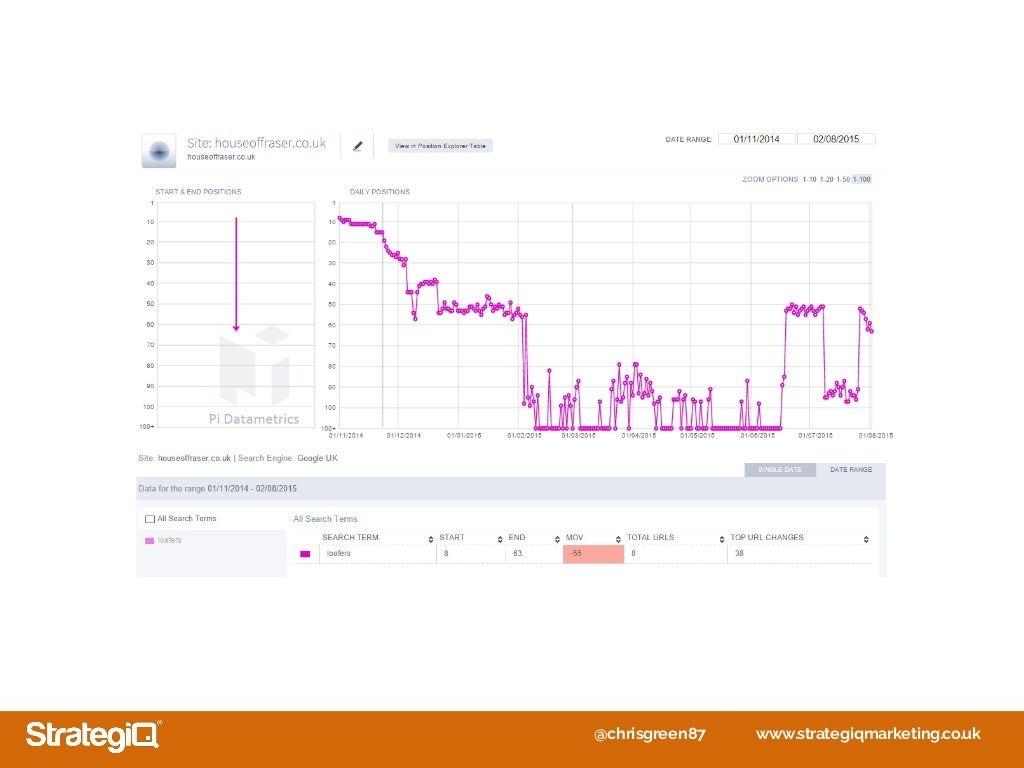 How to Fix it?

If you’ve discovered that someone has stolen your content, or that your own content is competing with itself, then there are a few steps you can take to remedy the situation.

If the offending pages are identical duplicates, i.e. generated accidentally by the CMS, then removing and redirecting them to the original is the easiest way to fix the issue. Canonical tags do a similar job if you need to keep the page live for user experience reasons. 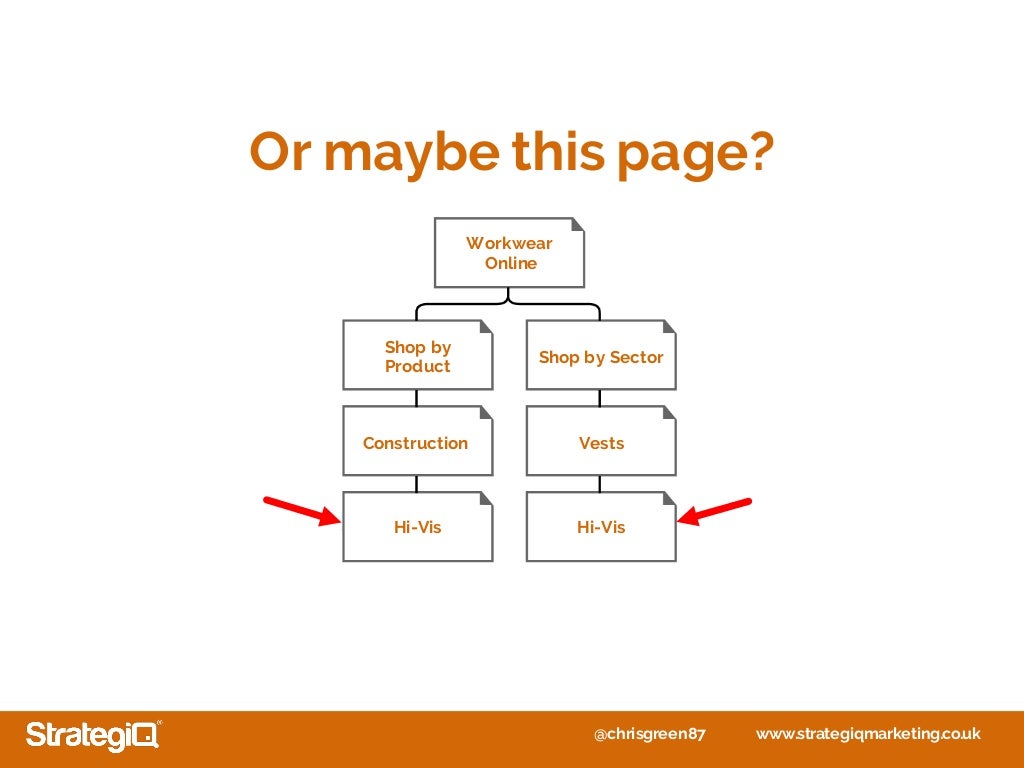 If the pages are different but are still competing, then re-assessing the keyword targeting and optimising the pages for different keywords will give Google a better idea of which one to rank for which keyword. This includes optimising things like titles, headings, body copy, etc.

Internal links can also be a big help in signposting Google to the most important page. Just make sure the page you want to rank is linked to from more authoritative pages on your site, such as the homepage.

If another website has stolen your content and is now cannibalising your pages, then you need to send them an email requesting that they remove their stolen content. Unfortunately, there’s not a great deal else you can do, since you can’t control sites that you don’t own, but if they refuse to take the content down, or don’t respond, then you can look to improve your own content so Google finds it more relevant to the search query.

This could involve adding more text, adding a video, adding images, or a combination of these. Gaining more external links would normally help improve your rankings, but from Jon’s tests it seems that this wouldn’t be much of a help in this case.

Keeping track of your own site is imperative for ensuring your content doesn’t cannibalise itself, so regular site crawls and content optimisation should be added to your weekly or monthly SEO schedule.

Is your content working better for someone else? @jonearnshaw from Jon Earnshaw
Cannibal Content - Stop Your Website From Eating Itself | Brighton SEO 2015 from Chris Green
More SEO
Back to Blogs